Luke Franks is the latest celebrity to embark on Invisalign treatment to correct the alignment of his teeth in full public view. The multi-channel presenter, who stars on television and radio, was most recently seen on TV at the Teen Awards interviewing the Vamps to the accompaniment of thousands of screaming fans. Many will also have seen him on the kid’s TV’s show Scrambled or digesting the results of The X-Factor. Not to mention, he has legions of fans for his YouTube channel.
Because of the demand to feed his YouTube channel, Luke constantly scrutinises his own appearance while filming. He noticed that although he has a cheeky persona, he does not smile or reveal his teeth in public, as he is quite self-conscious about them. So he reached out to Align Technology to tackle his twisted bottom teeth.

Dr Mohsen Tehranian who just started treating Luke with Invisalign commented “Luke has moderate overcrowding to his lower teeth. When Luke speaks or smiles you can see that how his lower teeth show more than his upper. However, fixing this is straightforward and it is anticipated that Luke will be smiling more broadly in 6-8 months. I know this as I took a digital scan of his teeth and uploaded it to special Invisalign software thanks to which we can provide a projected outcome and guidance about how many aligners he will need. As each aligner is changed after two weeks it is possible to work out the length of treatment, provided I don’t have to make any refinements along the way.”

Invisalign has made it possible to treat increasingly complicated tooth misalignments with an advanced, custom-made, and virtually invisible medical device which has significantly changed the way tooth straightening is carried out. Transparent Invisalign aligners are worn over the top and bottom teeth, hugging them snugly and gently persuading the teeth to move incrementally according to their dental professional’s tailored treatment plan. The aligners are worn 22 hours a day over the teeth but are removed to eat and drink and because they are made from clear plastic, they are virtually undetectable, making them an attractive treatment option for people in the public eye. 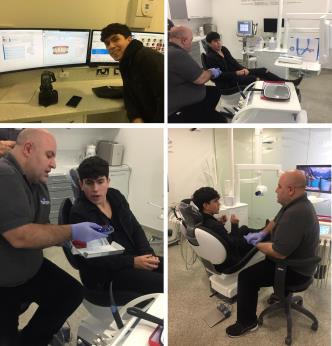 At the fitting of his first set of transparent aligners, Luke commented, “I had braces as a child – but these are nothing like braces”. He added, “My bottom teeth have gone back to the way they were before I had braces and I kept noticing one in particular as it is twisted and juts out, which made me self-conscious when I see myself on screen”.

Luke talked about the impetus for his treatment: “I know two well-known people who regularly appear on TV who are having Invisalign treatment, so knew that it was possible to continue to work without it appearing that I was having my teeth fixed. “

This corresponds with recent findings of a survey amongst men which showed that 63% of those surveyed would look for ways to have treatment to alter the positioning of their teeth if they had concerns, however 24% would only consider treatment if it was discreet.

Find a nearby practice : Invisalign