Our oral health expert, Christina Chatfield, of Brighton’s Dental Health Spa recently warned us against tongue and lips piercings and highlighted the damage they can do to our teeth and gums.

Here, she shares a story of one patient – Jemma – who suffered gum loss and loose teeth thanks to her tongue jewellery.

Christina says: ‘The images here show Jemma’s gum loss and her teeth are mobile but, with regular maintenance, we should be able to stabilise this – although it could have been prevented. 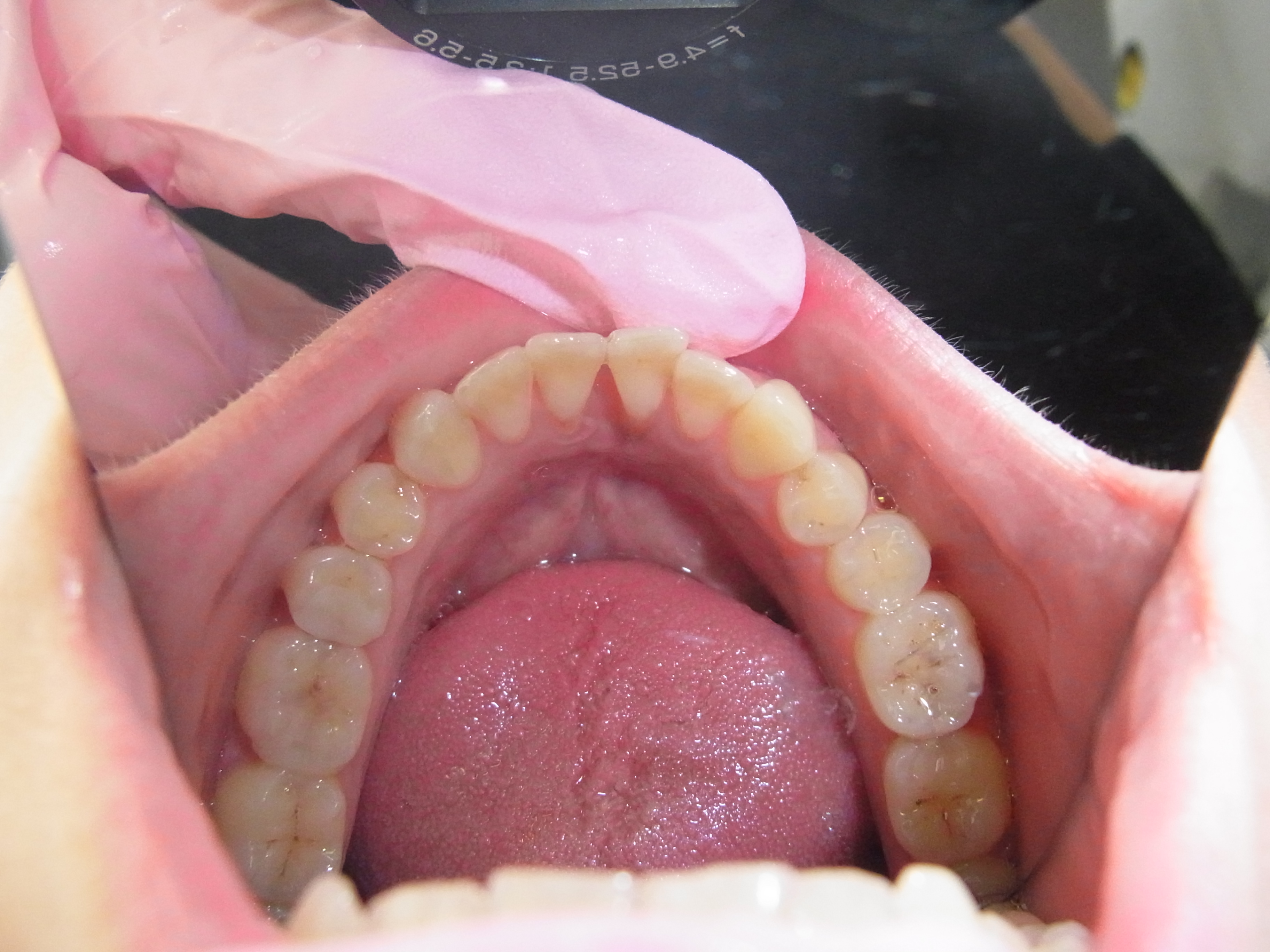 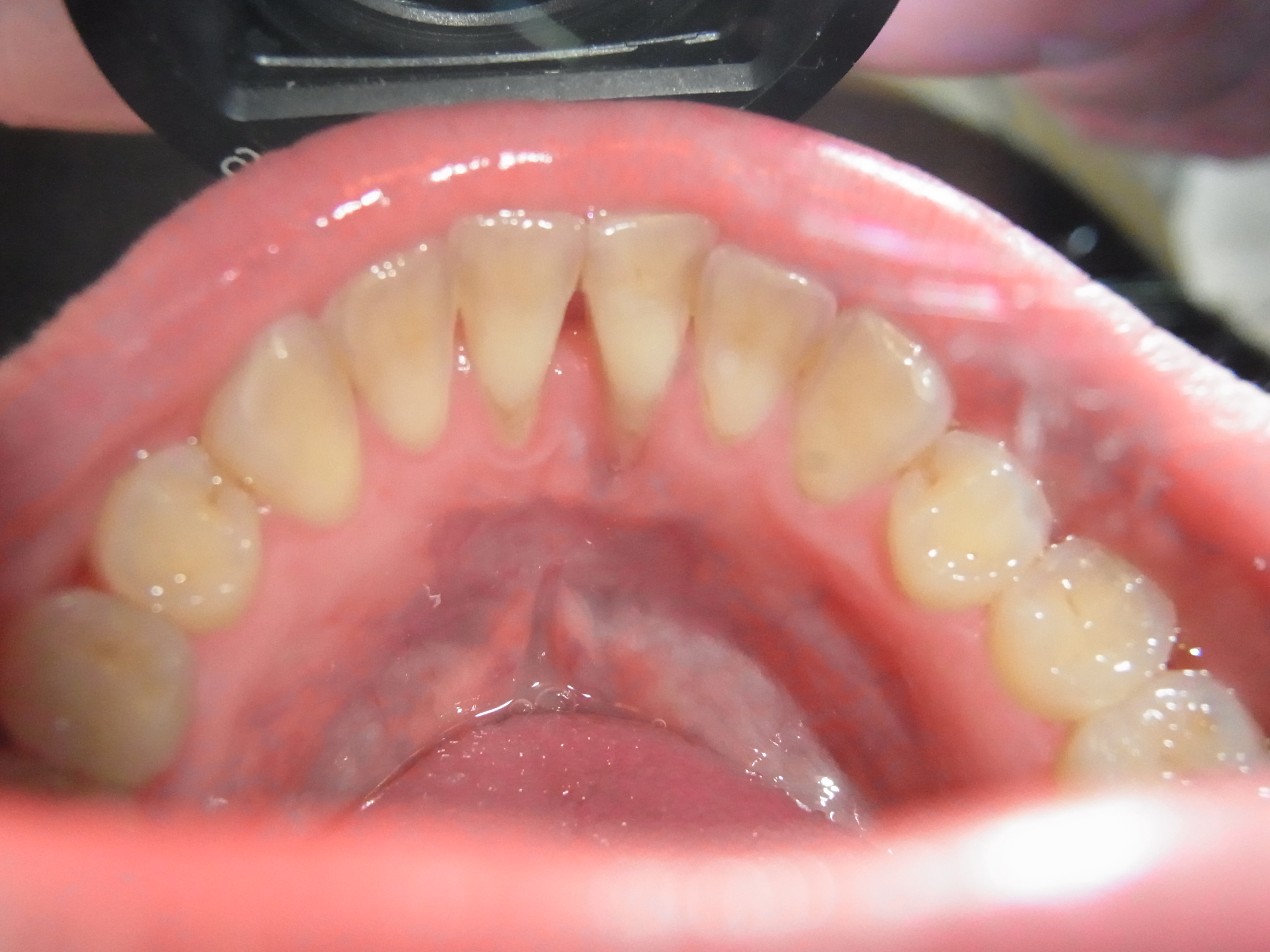 ‘Jemma is a pretty girl and ran the risk of losing her front lower teeth. I booked her in for a chat with me when she first booked an appointment – she was so nervous and was 35 at the time. She had seen her dentist two months beforehand, but felt she was unapproachable, and so had spent sleepless nights worrying about gum disease, even researching it online.

‘She had bone loss related to her tongue piercing (this had been removed a week beforehand) which cannot be put back – but it was not generalised and the cause should have been highlighted much earlier. This also causes damage to a tooth that can lead to root canal work, because teeth can die. She also had a cracked tooth but had suffered bad experience with numerous fillings and pain afterwards.’

Christina explains: ‘The mum-of-seven, who cares about her teeth, was petrified that she was likely to lose her teeth, based on what she was told. She had been told to use TePes (interdental brushes) and was prescribed the mouthwash Corsodyl, with little further explanation.

‘While it was not wrong for the dentist to tell her to use a TePe, he should have removed tartar and explained why the constant force had allowed the colonisation of bacteria under the gum. Plus, the right size TePe can make all the difference, so it is always worth asking your dentist or hygienist what colour suits your mouth.’

Jemma’s luck took a turn for the better and, having bumped into one of Christina’s patients in Tesco and discussed her case, Jemma’s husband immediately booked her in for an appointment with Dental Health Spa.

Jemma says: ‘When I was 18, I thought it would be a good idea to get my tongue pierced. I never gave any thought to how this would affect my teeth or gums.

‘It wasn't until I was in my mid twenties that I needed to have filling. This was due to me constantly biting down on my piercing by accident. Unfortunately, this was a re-occurring incident, which has resulted in the same tooth being filled several times.

‘Still, I never took my piercing out and was never advised to by my dentist. A few years went by and I changed my dentist to fit around my life at the time. I have seven children and felt it would be more convenient to have a dentist we could all see. My dentist never brought up that anything was wrong with the condition of my teeth or my gums, despite many visits and appointments.

‘Then, during a routine visit she told me I suffer from severe gum disease. She then went on to say I’d lose my bottom teeth. Understandably, I was devastated and took the decision to remove my piercing. In the following months, I purchased products I could use every day to help get rid of gum disease. I had absolutely no idea what I was looking for until a nice lady gave me some advice.

‘She highly recommended I visit Christina at Dental Health Spa in Brighton. Later that day, my husband booked me an appointment. During my first appointment, Christina reassured me that I wasn’t about to lose my teeth but I had gum disease around the lower front teeth, caused by the tongue piercing and bacteria.’

Jemma adds: ‘She then asked me if I had ever had a tongue piercing and patiently explained how my piercing had damaged my gums and, consequently, chipped away at the bone. Christina then suggested a treatment plan to help stop further damage and repair the affected area.

‘This plan has been on-going for the last three years, coinciding with dental treatment I also receive there. Christina has been very supportive and the treatment has been very successful. So, to anyone thinking of getting their tongue pierced – DON'T!’

And as a footnote, Christina says: ‘Contrary to popular belief, the tongue is not really the strongest muscle in your body, but its combination of strength, functions and flexibility can be very damaging to the bone of your front teeth if you have a metal tongue stud or piercing.’
book a consultation with Brighton's Dental Health Spa

Find a nearby practice : White Fillings