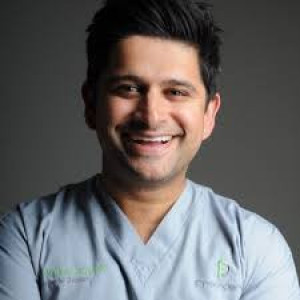 Dr Vasant is a highly experienced clinician with a special interest in minimally invasive cosmetic and advanced dentistry. His ethos is to create beautiful smiles without compromising the long term health of the teeth. He is a keen believer in the use short term/cosmetic orthodontics and adhesive techniques to improve the appearance of teeth without damaging them.
Qualifications
He qualified from The University Of Leeds in 2003 and spent several years in general practice before opening the well known Fresh Dental Bolton clinic, which now has clinics in London and Greater Manchester.

His postgraduate studies saw him initially complete several year long courses with Tipton Training and have subsequently taken him around the world. In 2013 he completed an Master of Science degree in Aesthetic and Restorative dentistry from the University Of Manchester, achieving a merit in the process.

In addition to this he has also undergone extensive training overseas by some of the leading dentists in the world.

In 2011 he undertook dedicated training in Switzerland to become one of the first dentists in the UK to provide Componeers. He is one of the few dentists in the country to provide the OSO athletic enhancer appliance which he provides to several elite athletes.
Teacher/lecturer
In addition to his clinical work around the country he regularly teaches dentists on well respected postgraduate courses for Tipton Training Ltd. These courses are run around the UK and in some parts of Europe and teach qualified dentists of various ages to perform dentistry to a higher standard and focus upon theory, knowledge and practical skills in order to achieve this.

He is a lecturer for the C-Fast cosmetic braces system and the Componeer immediate veneer system. He also runs courses for dentists on direct composite bonding for the Haraeus-Kulzar and Coltene-Whaledent companies.

In 2011 Dr Vasant lectured at the 1st Indo-British dental conference in Delhi, India, on minimally invasive dentistry and short-term orthodontics.

Dr Vasant was also one of the authors of a book named "Messages from dental masters" which was aimed at giving advice to dentists and was complied by some of the most notable people in the dental profession with some of the proceeds going to charity.
Awards
Dr Vasant and the Fresh Dental Bolton clinic have been shortlisted for several industry awards. At the 2010 Dentistry Awards he was awarded the title of the Best Young Dentist in the North West.

Since 2011 he has regularly been voted for by his peers in Dentistry Magazine's annual Dentistry Top 50 poll of the most influential people in dentistry featuring 17th and 21st in recent years.

In 2012 he was voted 3rd in the Private Dentistry Elite 20 poll of dentists in the UK run by Private Dentistry magazine.
Media
Dr Vasant regularly appears in the media having featured on television programmes such as GMTV, BBC's The One Show, ITN news and Channel 4's Goks Style Secrets. He has also been interviewed on dental matters for BBC Radio.

Welcome to Fresh Dental, one of the latest and most advanced dental clinics in Bolton and Holborn, London, offering the best in cosmetic and general dentistry.