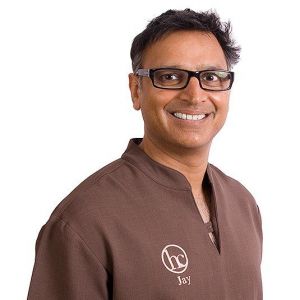 Dr Jay Patel gained his Bachelor of Dentistry from Kings College of Medicine and Dentistry, London in 1986. He worked in general practice with an emphasis on cosmetic work, placing his first porcelain veneers and undertaking whitening procedures over twenty years ago.

During the nineties, Jay turned his attention to a new field in dentistry – dental implants. Having undertaken his training at the prestigious Eastman Academy in London, he later gained his Masters Degree in Dental Implantology at the Charles Clifford Dental Institute. Passionate about dentistry, Jay is involved in teaching and training dental colleagues and is also Principal at Hallcross Dental Practice, along with his wife Chhaya who specialises in Orthodontics at Hallcross.

Jay and Chhaya became Principals of Hallcross Dental practice in May 2002 and have since invested in expanding the practice to provide a wide range of specialist care for patients. Over the years, Jay has built up a dedicated team, working closely together, giving Hallcross credibility and patients the highest level of professional care.

Jay is a member of the association of Dental Implantology, British Academy of Cosmetic Dentistry and the ITI (International Team for Implantology) and continues to further his professional development, which has previously seen him travel to North America and Europe, ensuring his knowledge is passed on to patients and colleagues alike, assuring them that they are in good hands.

In 2011, Jay became one of the few dentists in the country to turn his hand to Cerec technology. Keen to provide his loyal patients with the latest treatments, using 3D computerised technology, Cerec allows patients to transform their smile within one day, making high quality crowns in house.

Here at Hallcross we are a long established dental practice based in the heart of Wigston. Proud to offer affordable, accessible Routine Dentistry for all the family as well as a choice of advanced, high quality Cosmetic Dentistry as well as Implants.