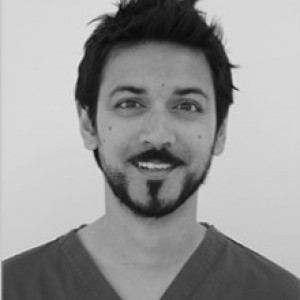 Adit completed his undergraduate dental training at the Royal London Hospital. Following his graduation, he worked in West Midlands for two years consolidating his knowledge and skills in an area of high dental need.

On returning to London, he spent a year in Whipps Cross Hospital as a Senior House Officer in the Oral & Maxillo-Facial Surgery Department, working in a unit that specialised in Head & Neck Surgery. During this time he also completed the Diploma for Membership of the Joint Dental Faculties (MJDF).

Adit then returned to The Royal London Hospital and embarked on a 3-year post-graduate specialist training pathway in the field of Prosthodontics, a branch of dentistry that focuses on the restoration of badly damaged, worn or broken teeth and the replacement of missing teeth using implants, bridges and dentures. He has been awarded the Masters in Clinical Dentistry (MClin Dent) in Prosthodontics and has been accepted for Membership in Prosthodontics (MPros) by the Royal College of Surgeons of Edinburgh. As a result of these achievements, Adit was recognised as a Specialist in Prosthodontics by the General Dental Council (GDC).

Currently, Adit works part-time at Naidu & Naidu carrying out a variety of restorative and cosmetic treatments (with a personal interest in management of cases of tooth wear and failing crown and bridgework) and provides a well-informed and patient-led treatment experience. However, for 2 days a week he leaves Harold Wood and is to be found teaching undergraduate & post-graduate dental students and supervising Senior House Officers at his old university, Barts & The London School of Medicine and Dentistry.'

We at Naidu &amp; Naidu would like to invite you to our dental practice in Harold Wood, Essex. Our team want to show you that dentistry can be a relaxing